Regrettably, on occasion individuals conversant with the methods of formal logic and philosophy venture into new subject areas immediately applying their analytical skills before seeking understanding of the concepts, precepts, or beliefs being adduced. Instead, the tacit and provisional application of the principle of charity should be implicit in every new intellectual and cultural endeavor.

As an example, I'd like to recount the analysis of a passage from a computer science programming book brought to me by a former student of beginning logic. The passage is ...

Your computer, on the other hand, can understand only machine language, a compact series of computer-readable instructions that make no sense to people. They make sense to some advanced computer gurus, but my general assertion stands that they don't make sense to people. (Greg Perry, Beginning Programming (Indianapolis, Indiana: Sams, 2002), 14.)

The analysis and reconstruction skillfully provided by the student of this third-order enthymematic argument was as follows: 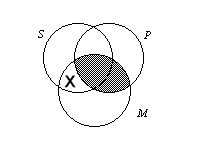 and the form of the argument, EIO-2, of course, tests valid:

Since the conclusion is obviously false, the implication is by reductio ad absurdum, that at least one of the premises is false, namely the general assertion that computer-readable instructions make no sense to people.

The heart of the analysis depends on the logical or precising interpretation of the notion of "generalization" as something all inclusive and applying to each and every individual distributively.

Certainly a charitable interpretation of the passage would indicate the author Greg Perry intended his "general assertions" to mean something like "Universally; with respect to all or nearly all ... As in A fact now g[enerally] received 1820." (William Little, et al. The Shorter Oxford English Dictionary on Historical Principles 3rd. ed. (London: Oxford Univ. Press, 1967), 783.)

It's certainly arguable that the student's logical analysis results from not so much the lack of tolerance or charity as it is a case of the fallacy of straw man, since the sense of the word "generally" to mean "almost all" is perhaps more common in everyday discourse than is the meaning "including each and every one without exception."
Posted by philhelp at 10:23 AM

philhelp
A native of Houston, Texas, I studied chemistry at Austin College and philosophy at American University, the University of Maryland, and the University of Arkansas.
When working as a research chemist in the Department of Nuclear Medicine at Walter Reed Institute of Research, I served on the U. S. Army Nuclear Emergency Search Team. International publications are in the fields of science, logic, and philosophy; current courses taught are in the areas of logic, ethics, scientific reasoning, and Eastern philosophy. Specialization is in philosophy of science. Current projects consist of developing "open source" readings in philosophy, logic, aesthetics, and Eastern philosophy in HTML, PDF and MP3 formats.
Logic Blog: http://my.opera.com/philhelp/blog/